Most Detailed Images Ever of Top-Secret U.S. Air Base Show Major Expansion

Detailed images of Area 51 released Sunday may not show evidence of little green men, but they do show that the super-secret Air Force base has grown significantly over the years.

"I want to see flying saucers as much as anyone," said Federation of American Scientist’s John Pike, who ordered the 1-meter (3.2-foot) images, the most detailed to date, from Thorton, Colorado-company Space Imaging. Instead, the photos -- captured over the past few months -- show that the area has significantly expanded since the first images were snapped of the infamous site over 30 years ago.

"It’s interesting to contemplate what is going on there. It seems as though there is tons of money going in there and nothing is going out," he said.

In particular, the photos show a runway that is about 3,800 meters (2.36 miles), or about 42 football fields, long. That’s even longer than the runways for the world’s largest commercial aircraft.

The barracks, the home for people who live on the base.

The images also show a burgeoning growth in the area, including a complete rebuilding and expansion in size of the housing complex for base personnel over the past 30 years. In addition, there are new support facilities.

And four aircraft hangars are visible off the runway. Conspiracy theorists have long believed that one of these hangars, dubbed Hangar 18, is the holding area for the alien bodies and captured alien technology taken from crash sites.

These high-resolution images, captured by Space Imaging’s IKONOS satellite on April 2, were released less than a week after Raleigh, North Carolina-based Aerial Images unfolded its series of 6.6-foot (2-meter) photos of the mysteriously secretive area over the Web, crashing the site for days.

Though the public’s ravenous appetite for these images was made obvious this past week, Pike’s purpose for getting these photos was different.

Pike said the request was a test to see how long it would take to gain access to these images and how they may be used by military agencies around the world.

"This is an interesting case study that enables us to explore in practical rather than theoretical terms just what is this 'Brave New World' we’ve entered into."

This so-called 3.3-foot (1-meter) resolution technology once was available only to intelligence agencies through their own spy satellites. But it has been estimated that by the year 2003, at least 11 companies in five countries will have high-resolution, remote-sensing cameras in orbit.

That sort of commercial technology in space worries government officials because they believe such detailed imagery could encourage industrial espionage, terrorism or more cross-border military attacks in the developing world.

But Pike seemed unfazed by the impact of this imagery on national security.

Because it took 2 months to get the images, he said the technology would only be useful during peacetime for monitoring specific regions instead of during wartime, when the military may need to target a strategic area.

"The war may already be over before you get your picture," Pike said.

Space Imaging’s Mark Brender argued that obtaining images doesn’t always take so long. "We can turn stuff around in 24 hours," he said. When twin tornadoes touched down in Texas on March 28, for example, Brender says that within a few hours they were evaluating the images and ready to release them to the public within 24 hours.

"We can produce images very shortly for natural disasters and crisis, " he said.

Area 51 -- 75 miles (121 kilometers) northwest of Las Vegas – occupies about 150 square miles (390 square kilometers) of a dried up lakebed in the Great Basin Desert, Nevada. It was named after the grid it occupies on an old Nevada map and came into existence in 1955 when aerospace company Lockheed Martin landed there to test the U 2, a high-altitude surveillance plane.

The top-secret base later became a proving ground for several generations of high-tech prototypes, including the F 117-A Stealth fighter.

The shroud of secrecy thickened once the Air Force bought up about 9,000 acres of land around the base to prevent the public from getting too close. In August 1994, an Air Force official admitted the base existed, saying the Air Force has "facilities within the complex near the dry lakebed of Groom Lake…used for testing, training technologies, operations and systems critical to the effectiveness of U.S. military forces."

Ufologists have long believed that unidentified flying objects from other planets are entrenched in underground bases in the region and insist alien autopsies are being conducted there. But, conventional wisdom says the base is likely a center for super-secret operations dealing with sophisticated military aircraft.

Did Pike ever believe that his request would produce evidence of the existence of aliens?

"No! I think all that [extraterrestrial] stuff is being done out of that CIA facility in Ohio," he said laughing. 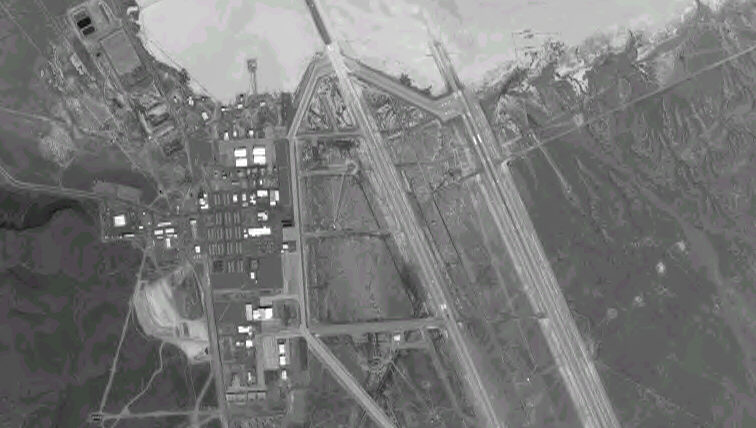 And below, a close-up photo of New Construction - just south of munitions area.... 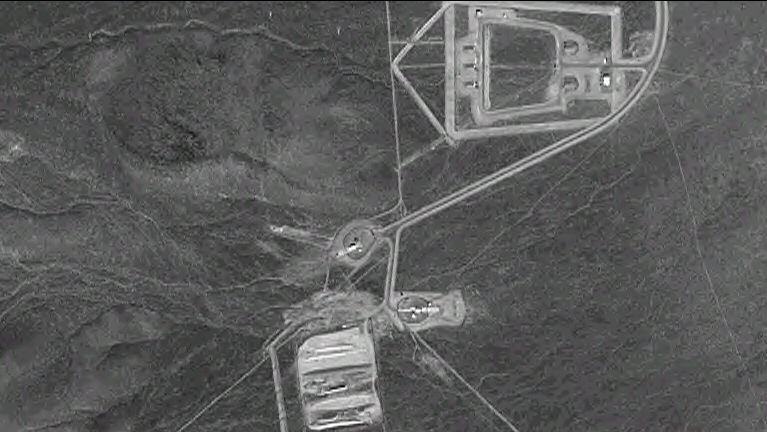